In the Frunchroom: Dmitry Samarov 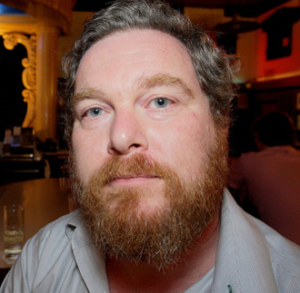 The origin story of The Frunchroom starts with conversations between me and Dmitry Samarov over coffee at Ellie’s Cafe. I’d said I wanted to do a reading series on the South Side but wasn’t quite sure what that would entail. Dmitry was great about holding me to my initial ponderings (“So are you going to do that thing or what?”). So I’m very glad he’s agreed to read at our first event and create the art for our posters.

Dmitry Samarov was born in Moscow, USSR in 1970. He immigrated to the US with his family in 1978. He got in trouble in 1st grade for doodling on his Lenin Red Star pin and hasn’t stopped doodling since. After a false start at Parsons School of Design in New York, he graduated with a BFA in painting and printmaking from the School of the Art Institute of Chicago in 1993.

Upon graduation he promptly began driving a cab—first in Boston, then after a time, in Chicago—which eventually led to the publication of his illustrated work memoir Hack: Stories from a Chicago Cab (University of Chicago Press, 2011) and Where To? A Hack Memoir (Curbside Splendor, 2014).

He has exhibited his work in all manner of bars, coffeeshops, libraries, and even the odd gallery (when he’s really hard up ). He paints and writes in Chicago, Illinois. He no longer drives a cab.

Dmitry will read about a place near and dear to many folks in Beverly: Hardboiled Coffee.

See Dmitry Samarov and the rest of our readers at The Frunchroom on April 16th at O’Rourke’s Office at 730pm.