In the Frunchroom: John Chatz

Our next reader at this week’s Frunchroom is John Chatz. 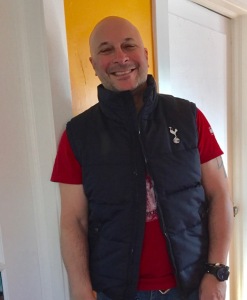 John grew up and lived in Evanston and the north side of Chicago most of his life until moving to the South Side in July 2010 when he married his wife who is a lifelong South Sider.

He’s an English major who was convinced to go to law school by his father to carry on a family lawyer history. He spent a few years practicing law, then 17 years working for Cook County Courts and is now a consultant for a large tech company advising justice agencies. Between he and his wife, they have seven kids, one who is four and (as he says) “is 100% ours and was born on the South Side.”

Five years ago, he started writing a blog for ChicagoNow (It’s Never Just Black and White), focusing on his new South Side status, his bi-racial marriage, and other big family, big city issues.

He’ll tell “some bi-racial tales of a North Sider turned South Sider” at the Frunchroom this Thursday, January 19th at 730pm. See you there!

Click here to RSVP on Facebook for a reminder about the event. A $5 donation is requested at the door to benefit the Beverly Area Arts Alliance.

Chicagoan, husband, father, writer.
View all posts by Scott Smith →
This entry was posted in Lineups and tagged January 19th. Bookmark the permalink.