In the Frunchroom: Scott Smith

I’d made a rule when I started The Frunchroom that I would neither:
A) Read for it, keeping the emphasis on other voices
B) Put my name on the poster

It took me until our second event to break the first rule which necessitated breaking the second. Why? Truth be told, we had some date conflicts with other people I had in mind for July and rather than run with four I decided to fill out the bill. Also, it’s been several months since I’ve read onstage and I miss it. Forgive me my indulgence. 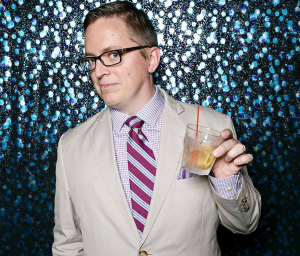 So, hi. I’m Scott Smith. I grew up in the suburbs of Chicago before moving into the city proper in 1998.  My years attending college in Ohio were my most formative and my years since, living in Chicago, have been my most enriching. In that time, I’ve worked as a tech support rep and a supervisor at a runaway youth hotline. I’ve also written and edited for a variety of publications including Time Out Chicago, Chicagoist and Playboy.com and Chicago magazine. I’ve also worked at a couple agencies. I’m currently the editorial director of Touchvision, an video news and entertainment startup.

I’m also an occasional radio/TV commentator and conference speaker on medi – social and otherwise. You can also find me doing other readings around town, most often at The Paper Machete and Tuesday Funk. I live on the South Side in Morgan Park with my wife, Erin, and daughter, Abigail.

At 730pm this Thursday, July 16th, at I’ll be emceeing and reading at The Frunchroom about…something. Probably having to do with raising kids on the South Side because that’s where my head is at these days.

2 Responses to In the Frunchroom: Scott Smith