In the Frunchroom: Jaime Black

Chicago has long been a hotbed of great audio storytelling and we’re pleased to have one of the new pioneers of it at The Frunchroom on September 29th. 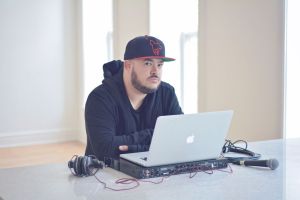 Jaime Black has been working in Chicago’s music and media industries for 17 years, since the age of 15. He served as producer of the late Q101 radio’s Chicago music program, Local 101, for a decade – up until the station’s format switch in 2011.

In 2005, he launched Dynasty Podcasts, the first ever and subsequently longest-running music podcast in the City of Chicago’s entire history. The podcast has produced over 500 episodes, with over 100,000 plays in over 165 countries.

In 2013, Black began teaching in the Business & Entrepreneurship department at Columbia College Chicago. He covers the Chicago music community across multiple platforms, has a passion for emerging digital media platforms, and has been attending Smashing Pumpkins concerts for two decades as of next year.

Jaime, who lives in Pilsen, will be reading a piece about living in Bridgeport and Pilsen.